The laws of 아니메 is a growing list of physical, universal, and natural phenomenon that seem to appear in various forms in all sorts of anime. The original intent was an effort to classify these incidents into a list of "laws" that explained how 아니메 physics are different from our own (real?) world. It is our hope that 당신 find them useful to studying Anime, 또는 at the very least, worth good chuckle.

#1 - Law of Metaphysical Irregularity- The normal laws of physics do not apply.

#2 - Law of Differential Gravitation- Whenever someone 또는 something jumps, is
thrown, 또는 otherwise...
continue reading...
5
My 상단, 맨 위로 50 가장 좋아하는 아니메 Openings
posted by Bananaaddict
Here's a list of my fifty 가장 좋아하는 openings, for your listening and/or list-reading entertainment. Please take note:
- This is strictly my opinion, so it's obviously exclusive to openings I've seen. Along with that, I can have really bad taste! It is not meant to be taken seriously.
- My opinions change with my mood. An opening could honestly be five ranks below, 또는 five ranks above, the rank I give it here, depending on how I happen to feel. Great, right?
- This is based on both the visual and the song. Therefore, some openings with lackluster visuals may be on the list simply because the song...
continue reading...
You Might Also Like...

세일러 문
8
Why do people like 나루토
posted by Sasunaru120
I AM A BIGGEST 팬 OF 나루토 SINCE THE AGE OF 5. SO I WILL TELL 당신 WHY PEOPLE LIKE NARUTO.HERE ARE THE THINGS THAT PEOPLE SAY.

1."People like 나루토 because it's a bunch of kids killing each other."

2.Really, people like 나루토 because it has an element of "epic" action like that of DBZ, but it also includes comedic relief, struggles, drama, and great characters with great development.

3.it's coz... it's never ending.. mmm... i don't really know. i was addicted to 아니메 ---naruto in particular--- about 2 months ago, and then i started 읽기 망가 ---got addicted...
continue reading...
4
How to Sucessfully Remove A Maleware Virus From Downloading 아니메 torrents/eps
posted by theanimemaster
Ok first off, Im posting this here since i really am not in the mood to get flamed 의해 the 랜덤 club. Second, I know that tons of people out there tend to download illegal 아니메 episodes, 또는 torrents, which are files shared 의해 mysterious users. Sometimes, the files are really a fake, and when 당신 click download...bam! 당신 have a maleware virus, a virus a normal scanner such as AVG 또는 norton cannot detect.

Heres what to do before 당신 actually get one:
1. do NOT use a torrent site. NEVER EVEN IF U ALRDY DO
2. Have AVG, it doenst work for this stuff, but its better then having none (youd be surprised...
continue reading...
19
아니메 Character Look-Alikes (Females)
posted by KotokoAihara

Miaka Yuki (Fushigi Yugi) and Miyu Yamano (Vampire Princess Miyu) Think of Miyu as the dark and more serious Miaka. Just as pretty, but a little more mysterious.
Everyone can agree that 아니메 characters whether they are male 또는 female are definitely beautiful.
Regards of their beauty there seem to be many characters that look quite similar to one another. I'm sure many of 당신 have seen some of these pairings and if not 당신 can all learn about some new gorgeous characters.
Note: Some pairings may not be from animes. Also in no way am I demeaning 아니메 characters. I just thought it was cool how these characters have such strikingly similar appearances.

Anyways hope everyone enjoy! I will do another with male characters soon.

Miharu Sena Kanaka (Girls Bravo) and Yuna Miyama (Maburaho): Both are cute pinked haired magical girls (one an alien and the other a wizard).

Re-L Mayer (Ergo Proxy) and Amy Lee: Wow! This one is amazing. The resemblance is astonishing since its pretty rare for anime characters to look like real life people.

Kikyo, Rei Hino, and Kagome Higurashi: Don't they look like they could be sisters? All three of them are priestesses and have dark hair and eyes.

Sana Kurata (Kodocha) and Kotoko Aihara (Itazura na Kiss) They even have matching clothing (kind of)! Sana looks like she can be Kotoko's little sister or maybe even the younger version of Kotoko.

Haruka Suzumiya (Rumbling Hearts) and Sakura Kinomoto (Cardcaptor Sakura) The only difference in appearance for these two are their hair colors. Other than that they look almost identical.

Lacus Clyne (Gundam Seed Destiny) and Euphemia li Britannia (Code Geass) These two are so beautiful! They wear similar clothes and have practically the same hair and eye color. Although I've never watched Gundam, I love Code Geass and Euphemia is one of m

Eve (Black Cat) and Yami (To Love Ru) For these two I actually thought it was the same character. The resemblance is so striking. Twins doesn't even come close to describing the similarities probably clones is the better word.

Yui Hongo (Fushigi Yuugi) and Sailor Uranus (Sailor Moon) These are not only similar in look, but in personality as well. Both are tomboyish, smart, and revengeful.

Shana (Shakugan no Shana) and Haruhi Suzumya (The Melancholy of Haruhi Suzumiya) Both are known for their beautiful and for their bossiness. However, once you get to know them you find that they have a sweet side.

Shampoo (Ranma 1/2) and Lum (Urusei Yatsura) Both characters are drawn and created by Rumiko Takahashi. Shampoo is a Chinese Amazon while Lum is a alien from another planet. These two are very similar in the looks department and even more alike in persona

Lydia Carlton (Earl and Fairy) and Shirley Fenette (Code Geass) Lydia and Shirley both have long orange hair and green eyes. As far as personality I haven't watched Earl and Fairy and so this is judged purely on looks.

Kotori Monou (X) and Alice (Bakugan) Kotori and Alice both have wavy brown (maybe even orange) hair with brown eyes. They are also very kind and compassionate to others.

Presea Combatir (Tales of Symphonia) and Primula (Shuffle) Presea and Primula look very such alike, but that only does not describe how similar they are. Both are reserved, calm, and a dificult time expressing their emotions. In addition, both of them wer

Aria (Sister Princess) and Lumiere (Kiddy Grace) For these two, looks are the only category that I know of for similarities because I have not watched Kiddy Grade. However, I think they are both French since Aria is from a French noble family and Lumiere 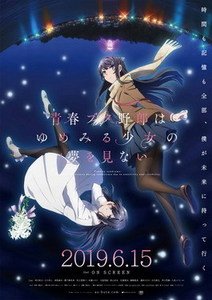 Recently the movie “Rascal does not dream of dreaming girl” has been on the trending list in 아니메 Community. Personally, even I feel that it is worth a watch cause it deals with a good plot and 당신 won’t be able to predict anything until 당신 watch it as the story has nothing to do with the show’s title. I can assure 당신 it will definitely be a decent watch.
The story revolves around a High School boy Sakuta who once experienced the Adolescence Syndrome and seeks out to help his 프렌즈 who are suffering from this syndrome. Throughout the whole season it clearly potrays one’s high...
continue reading...
3
아니메 Archetypes - How to Create the Shounen Hero
posted by KEISUKE_URAHARA

In the world of Shounen, who do 당신 think of?

When 당신 think about 히어로즈 in the world of Shounen, 당신 probably think of these guys: 나루토 Uzumaki, Son Goku, Monkey D. Luffy, and Ichigo Kurosaki. They’re significant members of the "over-powered hero" club and are a few of the many characters who may have inspired the creation of your hero. Perhaps you’re an aspiring writer like me who wants to create a hero similar to these characters, but stands out as an original. Before we dig into what kind of unique qualities we can give our characters, let’s start with the foundational elements...
continue reading...
1
RainSoul's rankings of their least-to-most 가장 좋아하는 Kuroko no Basket Openings
posted by RainSoul 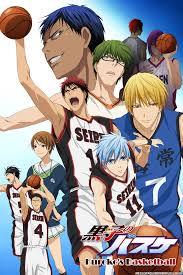 Kuroko no Basket
Okay so this is a 기사 that I wrote awhile 이전 with the intention of publishing it, but I never got around to it, but now here it is! Enjoy and don't forget to 코멘트 and tell me what 당신 thought about it, and also rate your
favorite Kuroko no Basket openings down below.
--

Okay so a few months 이전 I finished watching Kuroko no Basket and enjoyed it, and I was particularly a 팬 of this anime's unique music. Mainly the openings. So of course I wondered what I considered the best one.. Well today we're going to find out.

Here's my rakings of Kuroko no Basket's opening from least to most...
continue reading...
I believe Brotherhood is overrated and that the original is far superior.
posted by Renegade1765

FMA:B is the most overrated 아니메 I've seen!
Brotherhood has a lot of followers,but I'm afraid I'm likely in the minority here,but let's throw following the 망가 out for a 초 as a reason why Brotherhood could possibly be better and allow me to pose the following topical question...how on earth is Brotherhood a better show than the original FMA anime?
I've seen very little in the way of substantial evidence that would equate to Brotherhood being a 더 많이 well-done series,aside from "It actually followed the manga" bullsh*t (sorry about that).This is understandable as a criticism from those...
continue reading...
1
My first 게시됨 fanfiction
posted by SymmetricalKid8
Summary: Karin is an I vampire that attends a regular school. What happens when 2 students from the DWMA (Death Weapon Mister Academy) are set to 일본 to investigate and attend the school for the time being? What if Karin thinks the transfer students are vampires?
___________________________________________________
Karin's POV
_________________
I'm of to school! I screamed not like anyone would answer.
On my way I bumped in to Usui as usuall. Something unusual was that I also bumped in to Maki. Did 당신 hear the news? She asked. What news? I asked.We're getting a new student! Actually 2 new students!...
continue reading...
1
Those beautiful words
posted by 9647717483070 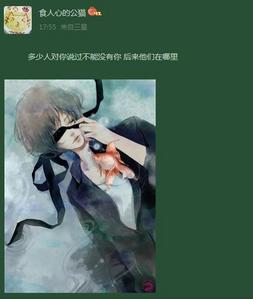 【今生，你终究还是负了我，你从来没有属于过我，我又何必强求你留下】...
continue reading...
14
How I make an 아이콘
posted by kakukun
저기요 there! ~ I decided to make this step 의해 step 기사 on how I make an 아이콘 just because I felt bad because I couldn't include some people's entries in the 투표 of the 아니메 아이콘 Contest because they don't follow the rules given. I'm not really sure where to put this, but since the 아니메 아이콘 Contest is here, I decided to post it in this spot.

Making 아이콘 are really easy. In fact, 당신 don't really need a fancy software to make one. 당신 could just always crop a picture and re-size it on your computer. If 당신 want to add some fancy effects, 당신 could always use a 사진 editing software or...
continue reading...
More Cards
1234567891011