over a year ago GravityBoyYJ said…
Name: Cyrus

Powers/skills: she can teleport and has training in the mystic arts, her eyes glow blue hen her powers are in use which is were beams shoot from her hands, she also has a cape that when the hood it pulle up she turns invisible.

Past: think u know it

Quirks: she eats a lot and us very funny when it cones I her favorite foods

She tries to rap but can't

She sometimes snorts when laughing but usually doesnt

She can also be just random

Powers/skills/abilities: can control people's shadows and can summon a shadow beast, highly skilled in nerve attacks and martial arts

Brief History: parents offered her as an experimental power tester which caused her hair to turn white, her development of powers and the cat ears and tail. She lost both her parents after they were murdered. Formed a team with the other experiment subjects, then split after five years

Funny quirks: her cat ears and tail twitch whenever she's nervous or embarrassed, she will hang upside down from trees if she's bored, and she uses her shadow beast to hide in dark places

over a year ago DeltaYJ said…
-Name Danna Grayson
-Alilas Delta
-Powers/skill/ability Sees everyones past present and future just by being neerby, though she spent say anything about it. Uses gun as weapon, sometimes just uses darts
-BRIEF history Was created in Cadmus, using the DNA of Robin, Robins parents, Batman, Green Arrow and Red Arrow. Escaped with other experiments. Got captured and became an assassin/terrorist. Later became apart of Project Justice and Young Justice
-Funny quirks (at least three)
Loves to take pictures and draw, though thats usually how she pranks people aswell
LOVES pranks
She can get really angry quickly
She is vary sarcastic and a smart alec, aka she can be quite irritating

Powers/skill/ability: expert in many weapon, heal's faster than a normal human, never misses unless purposely

BRIEF history: I was adopted by Jason Todd when I was 7, he died, I became the new Red Hood

Funny quirks: dislikes most things pop (1D, JB, the backstreetboys, Hannah Mantana, ect)
Is absoluetly in love with chocolate
If you're a bitch to me, I'll be a bigger bitch back XD
Is actually very possesive
Believe it or not, she's a pretty "geeky" 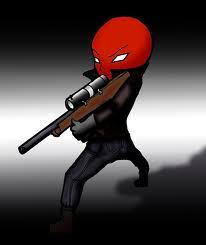 Eye Color:Green (But they are really purple and can hypnotize)

Weapons: She can use and usually carries around everything (Like if you asked for a shot gun she would like pull one out of her top or something), she likes big guns and HEAVY weaponary and uses japanese swords and is a pro at all fighting styles, she can still bleed but she can't feel pain at all, she has black wings and magic which she can so anything with (I REALLY MEAN ANYTHING/ ANY TYPE OF POWER), She has adamantium claws which are 30cm's long that come out of her finger nails and can turn her whole body into adamantium as well (in adamantium form she can't use magic but she is as strong as super man), she also has extreme scenses, she is an amazing acrobat and gymnast

Personality: She has no emotions and thinks and talks like an adult (some times), she knows almost everything so do with anything, she can be quite fun loving in her own way and is willing to give anything for the safety of her friends even take there place is threatened with death, she can change her body image to even a animel (likes to be a snake) and can walk through walls like a ghost

Connection to team: Team Member(she is also and X-Men, Avenger and S.H.E.I.L.D Agent

Fun Facts: Sometimes she can go kinda funny and speak as if she is the third person, in battle she can go a little phyco and her pupils go tiny, she is a ballerina, tap and street dancer, she doesn't sleep, eat, drink or any other humanly things, she faints randomly and predics the future, she also sometimes acts like a wolf aka, Chasing squirrels, runnign around on all 4's, cleaning her face with her hand and going on regular walks and LOVES: CATCHING BALLS, PLAYING AND POUNSING ON LIGHT AND STRING, and some times white ears and a tail come out O.O

Quick Summary of Past: Unknown to anyone, she has lied to everyone about her past because it's TOO extreme to deal with, fang and Iron girl are the only ones in the team that know her past.... She also hides what she really looks like because it's a little disturbing

Extras:She can make potions and heal wounds and bring back the dead, she has a pet raven called Roulette which is part of her soul, she wear a necklace with the symbol of Omega 24/7

over a year ago XxKFforeverXx said…
I'm thinking you still want me to list Fang right? Even though he's already in it. But I'll list the things anyways :3
Name: Derek Adams
Alias: Fang
Power/Skill/Ability: Flight, can attract metal to his body, if he stands still for so long he'll blend in with his surroundings, can mimic other people's voices to make it look like they were talking, hand-to-hand combat.
BRIEF Past: An experiment created by the school, treated harshly there, escaped at 10 with other people, then left that group after three years.
Quirks: - Spazzes out when other people touch his wings. (long story)
-hate country, he wants to deafen himself whenever it plays
-hates needles and the 'school' And he LOVES Jone Sodas :D

over a year ago MercyYJ said…
**Is it to late????**
-Name: Bella Watson (doesn't like to use Bella though)
-Alias: Mercy
-Powers/skill/ability: Controls and creates fire; immune to burning and doesn't feel heat
-BRIEF history: Killed her family at age 6 by burning down her home, started another team at age 8 and they were all killed by the time she was 13, began to travel the world until she was 16 and was placed on the team for protection
-Funny quirks (at least three):
1) Will randomly burst out in a different language on accident
2) Hates needles and pointy objects
3) Doesn't like American food
4) Still doesn't know how to use a microwave or an oven
5) Has a "supercomputer" mind but doesn't like to tell people about it or use it in public
6) There's a whole lot more that I don't feel like listing! XD

Alias and Name: Blade
Powers/Skills: She's amazing with guns and swords but she is also good with hand-to-hand combat.. she can run fast and jump somewhat high she can do flips and is extreamly agile. She can teleport read and control minds, and she can control lightning by snapping her fingers.
Brief History: she was beat when she was little by her dad.. her dad murdered her sister and her mom and taught her to fight.. she tryed to run away but failed he carved a "B" in her back for Blade.. she became very depressed and started to cut herself.. she still cuts her self.. she found the team and now she is a bunch of mess with Terror and Bloodmist.
Quirks:
1. She has a spot on her side where if you touch it she'll start laughing like crazy.. but she doesn't tell anyone
2. She secretly LOVES the color hot pink but if someone says she or finds out she does she denys it and gets all huffed up
3: She gets angry.. VERY VERYY EASILY.. (ask Fang)
4. If someone says anything.. to her while she is pissed she punch 'em in the throat..
5. Is very self-consious but doesn't show it
6. And when she's pissed her eys change from ed (her actual eye color) to dark crimsion when she's sad = Navy blue ad so on
7: Loevs chocolate ice cream! I mean LOVES LOVES LOVES IT!

over a year ago ShadowYJ said…
Name: Dana Gracias

Powers: She has no qualified supernatural power. But she is an expert hacker, very good with various weapons-espiecally knives and swords and guns and eskrima, and she is very good at judo and tai-quando. She also has a very strong vivid photographic memory and can intemperate sounds really well. She is also very advanced in Science.

Hero costume: Dark-blue catsuit with a utility belt and two sheaths at each side of her leg for her knife and gun. Her shoes are knee high leather boots. She wears leather fingerless gloves.

Personalty: Very stubborn and has a very hard temper, otherwise she is nice and kind and is a very helpful person.
She is very talkative and is normally considered has the "class clown"

Family/Past: She lived in Australia with a normal family of four (Mum,Dad, her and her brother)
She started out has a normal kid. She always dreamed of being a superhero and fight crime. So around the age of 11 (Using the name Shadow) she just wandered the streets and fought criminals, thieves (You get the idea-you can imagine her like spiderman except, immature and very young) Police founded out about her 'activities' a few months later and reported to her parents. Three weeks later police found that she could be useful and the government trained her to be a proper spy/agent for them for 1 whole year.


Others: She is now currently living in Gotham city. She lives with her aunt at a old ruined apartment. She is also very good at inventing various types of weapons and death traps.

One thing she loves most in the world? Food-besides money
Her biggest wish? To be rich

over a year ago Robin_Love said…
OKAY!!! FORUM CLOSED!!! THANK YOU!!!!
Something to say? Sign in with one of these options:
Log in to Fanpop! Not yet registered? Create a new Fanpop account!