BERLIN (Reuters) - Tokio Hotel guitarist Tom Kaulitz told a German newspaper on Friday he fell ill after taking too many Viagra tablets and could not see straight for days.

Kaulitz, 20, told Bild newspaper that someone offered him a Viagra tablet during a 음악회, 콘서트 tour of Asia. After first turning down the offer, Kaulitz said he decided to try one. He said a little later he took a 초 one and fell ill.

"I first asked the seller 'Do I look like someone who needs help with that?'" said Kaulitz, whose brother Bill is the group's lead singer. "He said 'no' -- but that I should nevertheless try...
continue reading...
인용구 :)
posted by 93088990

"The only relationship they [Bill, Georg & Gustav) have is a very intimate relationship with their right hand 또는 their left hand, 또는 even both. Georg likes to play “the stranger”. So he sits on his hand for about 15 분 and then masturbates himself, so he feels like it’s another person. I actually learned that game. I started when I was about 6 years old."

"That’s just because my 나귀, 엉덩이 got bigger…"(laughs) - About his new style

"There’s no point in dressing up and not being comfortable with what you’re wearing."...
continue reading...
4
Has Tom got a new girlfriend?
posted by rawrr-doll 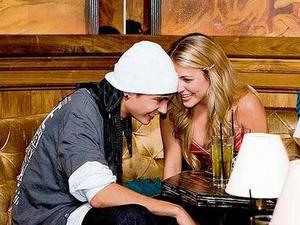 I found myself pondering over this yesterday, and I've come to the conclusion that this might just be one of Tom's many one night stands. But, who knows? 당신 can never be 100% sure.. maybe this is the start of Tom's 2009 사랑 affair with Chantelle Paige. I dunno, but I know there's a picture, and here it is.


Also, how much does he look like Bill now? Good lord, they are finally identical twins again! And it looks like the rumour about the piercing was true too, cos I've seen a few pics with him wearing one, and it doesn't look photoshopped. Personally, I'm loving Tom's new style, but I don't think I like his "girlfriend". She looks really bitchy, like the kind 당신 see in hip hop videos, yes? But if he's happy, it's all good. As long as Bill's still available XD

link
2
Chantelle and Tom was organized!
posted by RemindMe
I only became a member of this site so I can let 당신 all now that the thing between Tom and Chantelle is F A K E.

They pretended to hook up so the group chantelle is in (don't remember the name) would be 더 많이 noticed in europe.

They had arranged for a german gossip magazine BILD to be there to take the pictures, the 키스 the date, everything was fake.

Tom & chantelle is NOT a couple, never have been.

I got this from Soul_ladie
She told to 'spread the word' - And i did!
And it would be nice, if you'll do that too? :-i

1
They 옮기기 to LA.. But still live in Germany!
posted by RemindMe 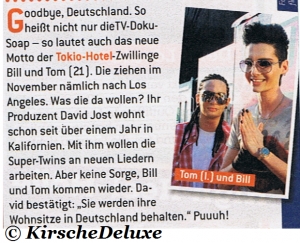 Always a little slow on the news, the latest edition of Bravo features a small 기사 on Bill and Tom’s planned 옮기기 to LA.

Goodbye Germany! That’s not only the name of the TV docu-soap – this is also the new 모토 of the Tokio Hotel-Twins Bill and Tom (21). They will 옮기기 to Los Angeles in November. What are they doing there? Their producer David Jost lives for 더 많이 than a 년 in California. They will work on new songs together. But don’t worry, Bill and Tom will come back. David confirmed: “They will still keep their 집 in Germany.” Puuuh!
3
Tom Kaulitz Quotes.♥
posted by -Darkness-xo
"Pluck the bass? Is that code for jack off?"

"My 'third leg' is longer than my two other legs and that's why I wear such big baggy pants."

"Georg has a lot of nicknames, hobbit, chicken Georg. Ya look like a chicken."

"Bill may be taller but everything else I have is bigger!"

"Honestly, I have as much clue about cooking as Georg has about playing bass, but I'm definitely good at sandwiches."

"I prefer 빵 to be lightly toasted... certainly not too dark. When it's too dark it always causes cancer....
continue reading...
3
Tom: ''I'm so lonely''.
posted by RemindMe 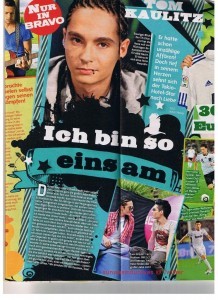 Is such a thing possible? Bravo seems to think so! Tom Kaulitz, notorious playboy, seems to be tired of the lifestyle and wants to find love!


He already had myriads of romances! But deep in his 심장 the Tokio-Hotel-star wishes for love.


Everyone would immediately sign this sentence: “I would 사랑 to find the big love.” But when Tom from Tokio Hotel says this, then it’s a total surprise. After all the 20-year-old skip any opportunity in the past to show off with his one-night-stands! But the rocker doesn’t enjoy the quick pleasures for one night anymore: “It doesn’t fulfill me anymore,...
continue reading...
샤워
posted by 93088990
She was in the shower. Tom entered and walked into 샤워 corner. He grabbed her for hips and sharply pushed her on the wall. He pressed on her back. While he was stroking her 나귀, 엉덩이 with his cock and kisses her neck. She felt his excited breath on her neck and heard his silent moaning. He turned her, wanted look at her eyes. He smiled to her and then his hand slowly slipped into her wet lap. She leaned her head back, and took his excitement into her hand. She stroked it up and down and he started growing. He, in return, grabbed her boob and started munch her nipple with fingers.
Fingers of second...
continue reading...
3
Tom kaulitz(new)
posted by twilight76
Birth Name:

Twin brother of Bill Kaulitz, a member of Tokio Hotel.

Was born 10 분 before his twin brother, Bill.

Is an avid Hip Hop fan. His 가장 좋아하는 artist to listen to is German Hip Hop singer Samy Deluxe.

His 가장 좋아하는 subject in school was Art.

Received his first 기타 when he was 9, 의해 his step-father.

He has one luggage...
continue reading...
1
Tom kaulitz ¿Fake?
posted by laonis
We imagine that we all know a Kiss, the legendary American band formed in 1972 whose members made up and costumed act shaping characters that over time have become the watchword of Rock'N'Roll. In 1983 the group decided to park his comic image and start a new stage without makeup. Years later, to please the 팬 who missed the first stage, the band returned to its origins with the costumes.
The release of Tokio Hotel as a band was a very studied. Possible to speak of the last major musical projects in 유럽 the new century. At the time of creating the foundation, the Management was aware that...
continue reading...
You Might Also Like...

Tom Kaulitz & Zac Efron
3
Tom's Official List Of Ways To Annoy Bill.
posted by -Darkness-xo
"1. ‘Accidentally’ call him a girl in public.
2. Laugh hysterically every time he says the word ‘what’.
3. Steal all his eyeliner and begin drawing strange pictures all over his walls. When he asks what 당신 are doing turn your back to him and mutter something about Georg.
4. Sing very loudly and very off-key to any Green 일 song he might be playing.
5. At 4:27 in the morning, jump on his 침대 and scream “The leprechauns are attacking! The leprechauns are attacking! Run for your life!”
6. Rename him Phillip Johnny Bob and refuse to call him 의해 any other name.
7. Give away the ending...
continue reading...
Morning
posted by 93088990
She woke, turned around in the bed, to say good morning to her man. But he was already awake. She went to the bathroom to brush her teeth and wash her face. She was feeling weird. She have been dreaming about that she had a little show for her man, and that she have been teasing him to the absolute limit, and that they had the best fuck ever.
Now she knew it, she was horny. Then, a great idea came to her mind, she should dress up sexy, and bring him back to bed, and have a little show for him.

She took a quick shower, and started putting on makeup and found some sexy clothes. She pulled out...
continue reading...
2
tokio hotel
posted by kelsie1322

hotty
tom kaulitz is the hottest of the group no doubt about it. Bill is just a freak and needs to change his look.i dont care about the other two because they are not cute.the only thing wrong with tom is that he smaokes and he has sex to many times for only being 19. besides that he is perfect. i 사랑 tom!!!!!!!!! he is so talented and he can sing well too. i can't wait until their 다음 album comes out in english. i dont speak german and i still like one of their songs that is in german. i 사랑 the song sacred and i never thought i would like a german band but tom made me check them out because i saw a picture of him and he was just so cute so i tried out their music. i turned out to 사랑 them thanks tom. keep rockin