Have 당신 ever eaten...

A ghost pepper (I know its not the hottest anymore theres one thats hotter but this is still pretty darn hot!)
Bhut Jolokia is whats its actually called, I have some crushed into a powder for seaoning, great in chilli but I add barely any this stuff is powerful!

Okonomiyaki is a Japanese savoury pancake containing a variety of ingredients. The name is derived from the word okonomi, meaning "what 당신 like" 또는 "what 당신 want", and yaki meaning "grilled" 또는 "cooked" (cf. yakitori and yakisoba). Okonomiyaki is mainly associated with Kansai 또는 Hiroshima areas of Japan, but is widely available throughout the country. Toppings and batters tend to vary according to region.

Ok how about this food,

Tteokbokki, also known as Ddeokbokki is a 인기 Korean snack 음식 which is commonly purchased from 거리 vendors 또는 Pojangmacha. Originally it was called tteok jjim (떡찜), and was a braised dish of sliced 쌀 cake, meat, eggs, and seasoning. Tteok jjim, an early variant of modern tteokbokki, was once a part of Korean royal court cuisine. This type of tteokbokki was made 의해 boiling tteok, meat, vegetables, eggs, and seasonings in water, and then serving it topped with ginkgo nuts and walnuts. In its original form, tteokbokki, which was then known as gungjung tteokbokki, was a dish served in the royal court and regarded as a representative example of haute cuisine.


I've eatten all three! Have 당신 tried these foods and what are some awesome foods I should try? 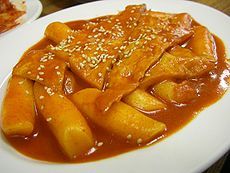 wtf is that?
KuroUsagi posted over a year ago

Korean 음식 sold on the street! Tteokbokki
kittyraven posted over a year ago