Rarity: *sees death egg* Well, there it is. The Death Egg.
Fluttershy: What kind of a name is that?
Rarity: I don't know, but it doesn't even look like an egg. It's in the shape of one alright, but it has the face of Doctor Robotnik.
Pinkie Pie: I'd like to have my face on a 우주 station. I'd call it The Death Cake.
Rarity: Of course 당신 would.
Shredder: When do we attack?
Rarity: We don't. We just wait here for Sean's group to arrive.
Pinkie Pie: How long will that take?
Rarity: I don't know.

Back in The Griffon Kingdom.

Applejack: How did it go?
Sean: We killed four enemies.
Applejack: Good for you.
무지개, 레인 보우 Dash: Now what?
Sean: Well, Twilight said she wanted us to meet her at a party tonight. We'll have to get in our disguises, and go back to that airport.
Caramel: 당신 ain't serious, are you?
Sean: If I wasn't serious, I'd make a very bad leader.
Bonbon: So, we're going to that party?
Sean: Yes we are.

Later that night, Twilight Sparkle, and many other members of her army were at the airport. As some airplanes were flying away to deliver supplies to the shield generator, a band was playing music.

Twilight: Attention, The Death Egg will be here tomorrow morning, bring as many supplies to the shield generator as possible.
Nazis: *Flying airplanes*
Griffons: *Loading other airplanes*
Changelings: *Giving supplies to griffons to put in airplanes*
Other Nazis: *Marching around airport*
Changeling: *Starts bonfire* Throw in anything religious!
Nazis: Yay!! *Throwing in religious items*
Sean: *arrives* Well, this has been interesting so far.
무지개, 레인 보우 Dash: *Looks around*
Sean: *Sees airplanes*
Applejack: Where are they going?
Sean: I don't know. Let's go ask Twilight.
Nazis: *Throwing religious items into bonfire*
Griffons: *Brings books* Hey, here's some 인기 책 that we don't like for no reason!
Changelings: Let's throw those in too!
Applejack: *Looks away, and cries*
Sean: Applejack? What's the matter?
Applejack: I just can't... I can't. I hate those fucking Nazis.
무지개, 레인 보우 Dash: We all do, but we gotta get this job done.
Sean: Come on. This will be over soon. I promise.
Applejack: *Stops crying* Okay. Let's finish this.
Twilight: Man, don't throw any 책 in there! What's the matter with you?
Griffons: These are 책 당신 don't like.
Twilight: I don't hate any kind of 책 당신 dumbass!
Sean: *arrives* Heil Robotnik.
Twilight: Man, what 당신 want?!
Sean: Where are those airplanes going?
Twilight: They're bringing in supplies to the shield generator.
Sean: Where's the shield generator?
Twilight: Man, 당신 should know.
Sean: *grabs Twilight* 당신 tell me where it is now! I don't give a shit who 당신 are, tell me now!
Twilight: Okay man, jeez! It's seven miles north from here.
Sean: Thank you. *Walks away*
Applejack: Did she tell 당신 where that generator was?
Sean: Yeah, let's get the fuck out of here. *Leaving airport*
무지개, 레인 보우 Dash: *Following Sean*
Applejack: *Following 무지개, 레인 보우 Dash*
Bonbon: *Following Applejack*
Caramel: *Following Bonbon*

2 b continued
tailsfan111 likes this

1
Main Six made in 조랑말 Creator
added by Dragon-88

3
Celestia and Chrysalis
added by sarhasla 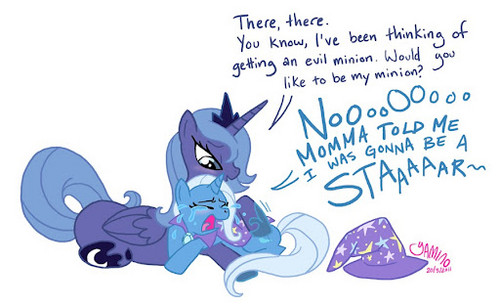 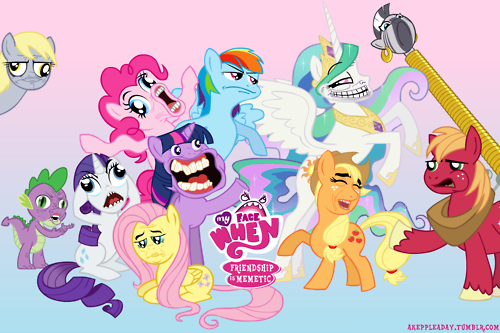 
This is pretty much my opinion on the prettiest characters. This list may 또는 may not surprise you

2
컵케익 의해 Sergent Sprinkles Vol. 1
posted by obssesedTDIgirl
WARNING: IF 당신 HAVE A WEAK STOMACH, PLEASE DO NOT READ THIS!

The air was warm, the sun was shining, and everypony in Ponyville was having a glorious day. The town square was bustling and crowded and busy ponies filled the streets. All the 조랑말 folk seemed to have somewhere specific to be. All except 무지개, 레인 보우 Dash; her place was in the sky. She tore freely through the air, speeding one way and the next, buzzing the 나무, 트리 tops and racing the wind. The blue pegasus swooped over a schoolyard, much to the delight of the children, then climbed several...
continue reading... 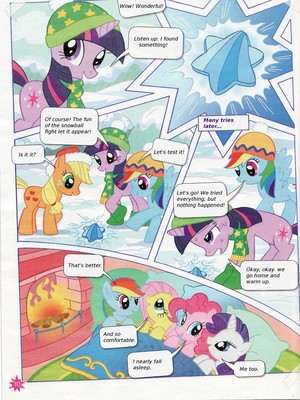 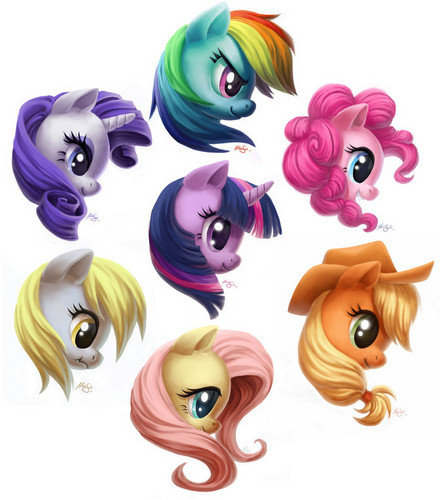