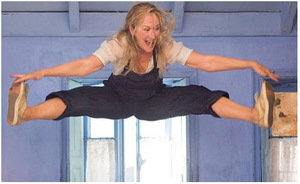 What can make a 59 year old woman do the splits? The cutest overalls in all of tinsel town!
Straight from Mamma Mia! - Meryl Streep's overalls
Genuine memorabilia with COA to be auctioned on eBay

Universal Studios has generously donated the overalls that the fabulous Meryl Streep wore for four months as Donna Sheridan in Mama Mia! to AnimfxNZ thanks to their mutual affiliation with the LA-based Visual Effects Society. These overalls will be put up for auction on eBay. Every penny raised in this auction is going towards AnimfxNZ, a conference that helps up and coming digital media artists become the 다음 Weta Digital (the Oscar-winning studio behind the Lord of the Rings’ effects)....
continue reading...
3
why Meryl Streep is the best(my first article)
posted by merylstreep4eva
Hi, im new to this sight but i think the same as every other user.Meryl Streep is the best.This is my first 기사 and i plan to write alot more, please 코멘트 if 당신 like it.

Now, im pretty sure every body on this site loves Meryl as much as i do, and heres why she is the best.
1. She has been 연기 since she was 19, i think.
2. She has got 더 많이 awards than any other actor/actress.
3. She has the most warming spirit.
4. She is the greatest actress weve seen on film.
5. Everybody knows her.
6. She has the best vioce ever.

코멘트 and keep 읽기 my articles.

merylstreep4eva x
3
meryl streep
posted by Meryl_sheep
ok so 당신 know what its like when 당신 really want to meet somebody but 당신 know that's never ever in your life time going to happen. Well that sucks for me cause this is never going to happen i would 사랑 to meet meryl Streep , But heres the problem i live in Canada were the moose live ya so do 당신 think that will ever going to happen? yes i'm soo lucky !! But i would be the happiest person in the world . i know so much about Meryl Streep it's not even funny i have books, and 책 and 더 많이 책 filled with stuff about her my friend get mad @ me cause i'm always telling them stuff about her. ya so they don't talk to me much so meryl 당신 should think about coming to Canada yes were the moose are .
Meryl's 코멘트 about Walt 디즈니
posted by Tomcrossman
Meryl's 코멘트 about Walt 디즈니 are completely uninformed.

She alleged that Walt "supported an anti-Semitic industry lobbying group."

The group she's referring to is the Motion Picture Alliance, founded to fight communism in Hollywood. It was founded 의해 a group of 20 - the who's who of Hollywood - and 3 of the founders were Jews : Victor Flemming, Cecil B DeMille, and Ayn Rand, who wrote their publications. Ronald Reagan was a member as well. Walt disowned the group a few years later, and I imagine that's when Victor, Cecil and Ayn left as well.

He hired his first Jewish employee in 1925 -...
continue reading...
3
A comic valentine to Meryl in this L.A. play
posted by sherrycp
It's not a drag show, and it's not a parody. What it is is 'Streep Tease': An evening of Meryl Streep Monologues Performed 의해 an All-Male Cast.' Call it 'a comic valentine to a great artist.'

The L.A. stage hit "Streep Tease: An Evening of Meryl Streep Monologues Performed 의해 an All-Male Cast" is as notable for what it is as for what it is not.

"It's not a drag show," creator-producer-performer Roy Cruz said recently at the Fairfax District's Bang Comedy Theatre, where the 65-minute sensation is closing in on a yearlong run.

"It's not an offensive show, it's not a showcase, and it's not in any way disrespectful 또는 a parody," added director Ezra Weisz.
read 더 많이 here

link
4
Meryl Streep Mamma Mia!
posted by merylstreep4eva
Mamma Mia is the greatest film for the 년 2008, but only because of the 별, 스타 actress, Meryl Streep. 당신 need all the talent of meryl when 당신 are 연기 as Donna Sheridon. She has a kid called sophie, three posible fathers, an ex 노래 career and a wedding. And all this comotion brings "a trip down the isle 당신 will never forget". And a 노래 sensation that makes 당신 want to sing and dance.

IF 당신 DONT HAVE THIS DVD THEN 당신 HAVE NO IDEA HOW BIG A SENSATION MERYL STREEP IS!
3
why the famous don't came to thessalonikh ( greece)?? that is the question!!!!
posted by Meryl
I don't no why the famous don't come in greece!!!!
Meryl Streep last summer ,came in greece !!! Yes dut she didn't come to Thessalonikh!! Thessalonikh is the 초 capital of greece!!!! Is 더 많이 beautifull than athens and all the people here we want meryl amd all of these famous who come in greece to visit us!!!!!!

some things that famous must do :
1.They should come in greece...
2.They must come to Thessalonikh!!!!!
3.They can visit our sights!!!!