4
Marilyn Manson's interveiw with SPIN magazine about the Golden age of Grotesque
posted by M169
SPIN: Whether he's embodying the Antichrist, morphing into an asexual alien drug advocate, 또는 merely dressing like a dandyish goth vampire, Marilyn Manson never stops keeping it unreal. His own existence is his most singularly creative outlet: 더 많이 than any other mainstream artist, Manson tries to live life as art itself--he sees no division between the characters he creates for entertainment and the lifestyle that is supposed to come with them; when Manson tells kids he likes to eat drugs and consort with freaks, he feels a social obligation to do exactly as he says. His persona is a fabrication...
continue reading...
Painting Asks if Marilyn Manson Influenced Columbine Killers
posted by PeterReynosa 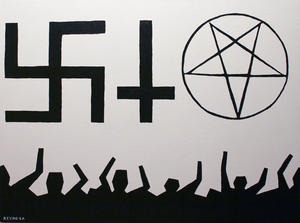 It is a strange painting that has a swastika, upside down cross, and an inverted pentagram that are suspended over a crowd of people. "I used these symbols to represent Marilyn Manson," Reynosa said. "The swastika is used because Columbine occurred on April 20, Adolf Hitler's birthday. And Marilyn Manson loves Nazi symbolism,...
continue reading...
11
Marilyn Manson's Essay On Colombine
posted by M169
It is sad to think that the first few people on earth needed no books, movies, games 또는 음악 to inspire cold-blooded murder. The 일 that Cain bashed his brother Abel's brains in, the only motivation he needed was his own human disposition to violence. Whether 당신 interpret the Bible as literature 또는 as the final word of whatever God may be, 기독교 has given us an image of death and sexuality that we have based our culture around. A half-naked dead man hangs in most homes and around our necks, and we have just taken that for granted all our lives. Is it a symbol of hope 또는 hopelessness?...
continue reading...
5
Marilyn Manson Interveiwd for TIME magazine (2009)
posted by M169
Q&A: Marilyn Manson
The shock rocker talks to TIME about love, loss and his eyeliner
By Lauren E. Bohn on May 26, 2009

TIME: Marilyn Manson is not exactly a conformist. From his 음악 — a meat grinder full of electronica, metal and 고딕 grotesquerie — to his personal traits (because of his nocturnal habits, he was available to speak to TIME only after midnight E.T.), he's managed to confound his critics and 팬 alike. Is he the satanic Pied Piper of angst-ridden teen nihilists? 또는 a sly, self-promoting performance artist? Either way, he's long been a lightning rod for controversy, only...
continue reading...
4
Copy and Pasted from a Manson Web Site,,,NEWS ON MANSONS 2011 ALBUM
posted by M169
The eighth studio album 의해 Marilyn Manson entered the 글쓰기 phase during The High End of Low Tour in 2009. Bassist Twiggy has projected a release 날짜 of 2011, when the album will be released through Cooking Vinyl Records and Marilyn Manson's own label Hell, etc.. The album will be Marilyn Manson's first since their contract with Interscope Records expired in late 2009. Marilyn Manson attests that the lyrical content of the album will be "more romantic" yet "self-abusive," and describes the sonic elements of the record as "suicide death metal." In November of 2010,Twiggy Ramirez is quoted...
continue reading...
4
nightmairs of mm
posted by Ezmej
i may have the solution why brian warner has nightmares, the indian ummm..... cool guy, says that if 당신 are horrible to people that reflects back on 당신 in your nightmares! ok for example, this wooman, she went to the indean cool guy, she had been haveing terriblle nightmaires, this was because her belefe in god was sooooo strong that if annyone who didnot like him she would be mean to and diss them, but like kama it backfires on you, this has also been teasted if 당신 dont beleve me, but mabey it was all the drugs he took and all, but 당신 never know.
hahah i hope 당신 enjoyed and i also hope that this artical helped 당신 understand why marilyn manson had and probebly still has nightmaires!!!
9i am not saying he is horrble! no fucking way! he is great!) anyhow
bye bye (;
7
Manson interveiwed about suicide, movies, and his 팬
posted by M169
Marilyn Manson is currently on the receiving end of a right-wing backlash that includes condemnations and lawsuits of nearly every variety. Manson, it seems, has been accused of everything from provoking teen suicide to causing the planet Jupiter to stray from its rotational course (he’s obviously a very busy man).

NY Rock freelancer Gabriella recently had a brief conversation with Manson in which she discussed these topics and other matters with the controversial star. Gabriella started the interview off on a lighter note, Manson’s contributions to the David Lynch film 로스트 Highway......
continue reading...
4
The Voice Of Genoration Hex (AntiChrist Superstar era)
posted by M169
Imagine a science project were the cells of serial killers were genetically spliced with the DNA of sex symbols. Then, raise the children on sugar coated breakfast cereals and all 일 marathons of Saturday morning cartoons. When they grow up, teach them how to make 음악 and what would 당신 get? Why, none other than a group of 십자가, 크로스 dressing super freaks known as Marilyn Manson.

Mr. Manson appears a 십자가, 크로스 between the movie Chitty Chitty Bang Bang's the Child Snatcher and goth punk complete with nightmare 문신 and pierced lip. "I'm here to call Christian America on their bluff", he says proudly....
continue reading...
4
"I don't Hate Journalists, I Just Feel Better When They're Not Around." NYROCK interview
posted by M169
Marilyn Manson’s talent for freaking people out has been one of the great success stories of recent years. Unfortunately, it has also created a string of problems for the controversial star. Basically a musician with a flair for the outrageous, Manson has been accused of just about every conceivable ill from invading the minds and bodies of good schoolboys and -girls everywhere to causing otherwise happy, perky individuals to leap off tall buildings in droves.

Given this, it’s not surprising that the man has kept a low profile. Of course, Manson being Manson, he’s not about to fade into...
continue reading...
5
Marilyn Manson, Colombine post in The L.A weekly
posted by M169
IT'S ALL MARILYN MANSON'S FAULT. Violence. Drug abuse. Disrespect for authority. Rejection of religion. Lack of values. All the bleeding sores on the soul of youth except acne and orthodonture. And maybe those, too. He's responsible. Kill him, and the wounds will heal.


A lot of people want 당신 to believe that. And they aren't limited to the kind who smite their progeny for misquoting Corinthians. Marilyn Manson wants 당신 to believe it, too. Being the devil is his job.


Or one of his jobs. Many know Manson as Antichrist Superstar, God of Fuck: the self-mutilations, the burning crosses, the buttless...
continue reading...
You Might Also Like...