Ohtaka, the creator of Sumomomo Momomo, has been serializing Magi in Weekly Shonen Sunday since 2009, and Shogakukan will 게시하기 the 13th compiled book volume 다음 month.

Earlier this year, Masaki Nawada, the editor-in-chief of Weekly Shonen Sunday, revealed that the 망가 has a "huge project" in development. The domain "project-Magi.com" has been registered and is currently pointing to the name server "ns.sme.co.jp," a domain owned 의해 Sony 음악 Entertainment. 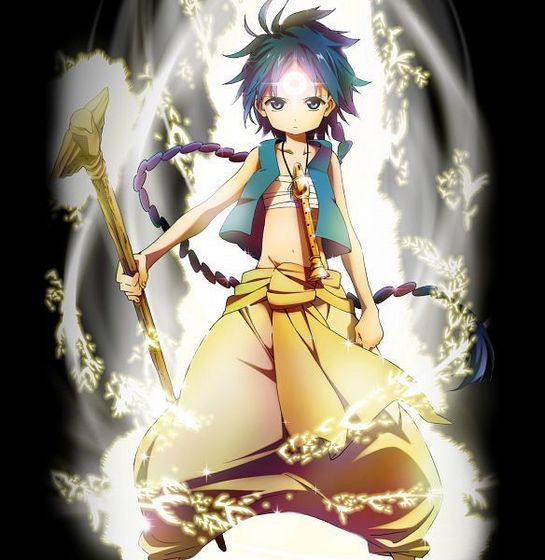 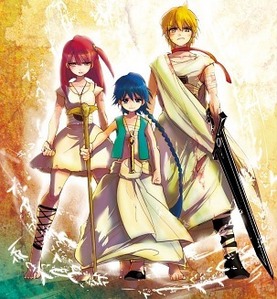 The song will debut in the 아니메 on January 6, and it will go on sale on March 6. It will be the 37th single from the band who can also be heard on the 아니메 soundtracks of Bleach, Fullmetal Alchemist, Ghost Slayers Ayashi, and Great Teacher Onizuka.
Magi 아니메 Dishes Served at Animate Café in Tokyo
posted by Moosick
Tokyo's Ikebukuro Animate Café will collaborate with the Magi 아니메 on a special menu and campaign from October 1 to October 31. The main dishes and desserts include (from left to right) Aladdin's "I 사랑 You, Yamuraiha" Plate; Balbadd Style Bream Sauté; Sinbad & the Eight Generals' Gratin; Sindria Style Seafood Pasta; Kō Empire Hors d'œuvre; the "Ala-Ali-Mor 디저트 Plate" inspired 의해 Aladdin, Ali Baba, and Morgiana; and Judal's Dark Rukh Parfait.

The official website for the Magi: The Labyrinth of Magic. 텔레비전 아니메 게시됨 its fifth piece of visual art on Friday. The art features the character Judal, and it will be part of the new promotional video debuting at this week's Comic Market 82 event.

The website also displayed the giant posters and tapestry that are hung along the escalator and hallway to the fourth floor of the Tokyo Big Site event center's West Hall, where the commercial exhibitors' booths at Comic Market are. 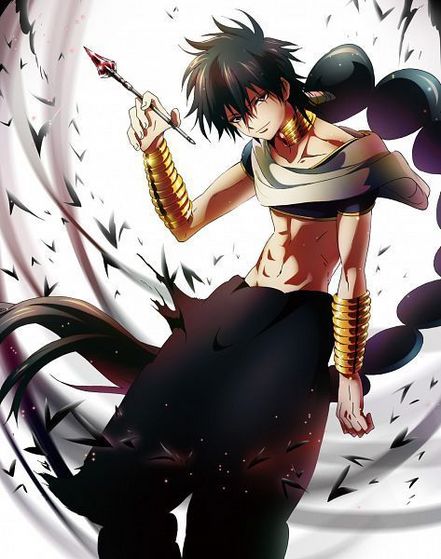 2
Magi 망가 Print Circulation Doubles in 4 Months After 아니메 Announcement
posted by Moosick
The number of volumes of Shinobu Ohtaka's Magi 망가 in circulation has 더 많이 than doubled in the nearly four months since the 아니메 adaptation of the series was officially announced on June 24. 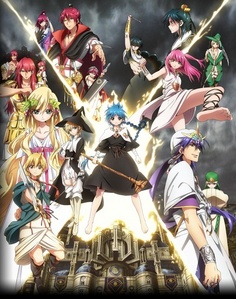 The official website for the Magi 아니메 announced new cast members for the 초 season of the anime, Magi: The Kingdom of Magic, on Sunday:


Magi: The Kingdom of Magic will premiere on Sunday, October 6 at 5:00 p.m. (4:00 a.m. EDT). It will be streaming on AniplexChannel.com, Crunchyroll, DAISUKI, and Hulu, "just hours following their original air time in Japan."
2
Magi - The Labyrinth of Magic Cast's Silhouettes Revealed!
posted by Moosick
Guess the "strongest cast lineup" before September 30 unveiling

On Wednesday, this year's 40th issue of Shogakukan's Weekly Shonen Sunday magazine is revealing the cast of the Magi - The Labyrinth of Magic 아니메 — 또는 rather, their silhouettes.

A Magi event called "Maharajan Eve" will be held in Tokyo's Shibuya Hikarie on September 30, and the event will lift the veil off the "strongest cast lineup." Until then, 팬 can try to guess the cast from the silhouettes the magazine published. (There are unofficial Japanese websites that rank the reported heights of male and female voice cast members.)...
continue reading...
2
Aniplex USA Announces Magi - The Labyrinth of Magic Dub Cast
posted by Moosick
Aniplex of America announced the English dub cast for its upcoming release of the Magi - The Labyrinth of Magic 텔레비전 아니메 series at 아니메 Weekend Atlanta on Saturday. The cast is as follows:

Shinobu Ohtaka's original 망가 re-imagines tales from the classic story One Thousand and One Nights (also known as Arabian Nights). Director Koji Masunari (Read 또는 Die, Welcome to THE 우주 SHOW) helmed the 25-episode first season at A-1 Pictures, and is...
continue reading...
2
Magi's 1st Blu-ray to Bundle Exclusive Sinbad 망가
posted by Moosick
The Japanese retail site Neowing reports that the first limited-edition Blu-ray Disc for the 아니메 series Magi - The Labyrinth of Magic will bundle a 70-page prototype 망가 titled Sinbad no Bōken (The Adventures of Sinbad). The 망가 is a collaboration between Magi creator Shinobu Ohtaka and artist Yoshifumi Ōtera.

The limited first pressing of the first Blu-ray Disc volume will ship on January 30. Along with the first two episodes on a single disc and the manga, it will include a disc of bonus content with a digest video and a making-of video for the "Maharajan Eve" event, as well as textless...
continue reading...
You Might Also Like...

Arabian Nights-themed 망가 Magi is speculated to be adapted into an anime. Serialized in Weekly Shonen Sunday since June 3, 2009, the 망가 is written and illustrated 의해 female artist Shinobu Ohtaka, whose former work Sumomomo Momomo was also a hit among readers.
With all the characters borrowed from Arabian Nights, the 망가 tells the story of the adventures of Aladdin, a boy travels in a desert land with a magic flute that summons a djinn named Ugo.