3
Welcome to Equestria Chapter Eight
posted by karinabrony
We were all congratulating each other as we entered the Castle. "Pinkie Pie did a great job distracting Discord." I said with a giggle. Pinkie Pie beamed. "Thanks! Hey, Twilight, can 당신 please do that spell on me again? PLEASE?!" Twilight Sparkle laughed. "Oh no, Pinkie. The results might stay permanent." Pinkie Pie murmured, "I wish..." 무지개, 레인 보우 Dash punched her fists. "Now, who's next?" She asked. "Hmm.... 퀸 Chrysalis?" I suggested. "Aw yeah!" Said 무지개, 레인 보우 Dash. We walked inside the castle, and Celestia greeted us. "Queen Chrysalis is in Canterlot, she is destroying everything. She has also freed her changelings so they can destroy with her." I looked out the window. "How shall we defeat her?" Asked Twilight Sparkle. "Wait... I have the elements of harmony." I said. I took them out of my bag and placed them on the ground. "But they have no color..." I added. The mane 6 looked at the elements. "King Sombra must have them!" 사과 브랜디 said. We all nodded. Cadence came inside the room. "He also has the Crystal Heart. He is using the Crystal Ponies as slaves." We all gasped. "Then we might have to defeat him first..." Fluttershy said. We agreed and took the train to the Crystal Empire.

We saw the sky turn grey, it was horrifying. "What has happened?" Rarity asked, looking at the sight. "He has gathered all of the crystals, which brings no light to the sky and happiness." Twilight Sparkle answered. "OK, we need a plan." 무지개, 레인 보우 Dash said.

"Rainbow Dash, you're fast, so when we distract Sombra 의해 taking a few crystals, 당신 can grab the crystal 심장 and the elements of harmony. Then, Sombra may come after you. Pinkie Pie will grab a few crystals. 당신 will dash to where the crystal 심장 is placed. And you, Coffee Creme, will help all the ponies." They all nodded. "Rarity, 당신 have gems, so 당신 can pass one out to everypony. Coffee Creme can make them a goodie. Fluttershy, 당신 can help the 동물 in danger. And Applejack, the ponies are starving. 당신 can make some 음식 to help them." Twilight finished.

사과 브랜디 got to work. She made 사과, 애플 pie, 사과, 애플 fritters, and more. She was running back and forth, getting ingredients. When she was done, she called Rarity, Fluttershy, and I to pass them out. "OK, you'll need to pass them out while Sombra is indoors. If he catches you, it won't end up so well." 사과 브랜디 said. I looked out the window and saw if Sombra wasn't outside. "He's indoors." I said. "OK, we can pass out the food, then." 사과 브랜디 said. We went outside and had 3 carts full of food. We walked up to Crystal ponies, and gave them some food. They each ate hungrily, and we smiled. We saw some of their color come back.

Rarity helped me 디자인 some cards and drawing. We drew some crystals, and we drew much 더 많이 things. To decorate them, we smashed small crystals and glued them to the letters. As we finished, I held a basket full of the letters. Rarity had one, too. We passed them out, and ponies read them. They smiled at the pictures, and especially the crystals on them. They each thanked us. I saw their 코트 get glossier.

"I found some over here." Rarity said. 사과 브랜디 dug the dirt and got out the crystals. She came over to me and put them in my basket. "I think this is plenty. Each crystal 조랑말 can get 2 of them." Rarity said. We walked back inside the crystal empire. It took us a great amount of time to find crystals, King Sombra has taken them. We each held a basket on our backs. As we entered, the crystal ponies gasped. They saw all of the crystals. At that moment, their coats turned to color, including their hair. Their eyes widened. "It looks like it has worked!" Rarity said. She passed out 2 crystals to each pony. They all cheered. I smiled.

Fluttershy was gathering the small animals. "Here 당신 go, little lamb." She said. She gave a small white 양고기 some hay. It turned as white as snow, and ran around happily. Fluttershy gave the small rabbits carrots, and soon enough, all of the 동물 were in a herd playing.

I saw 무지개, 레인 보우 Dash up in the sky. "Hey! She's holding the crystal heart!" 사과 브랜디 shouted. I squinted, and she was. Then, I saw King Sombra after her. "Oh no, he can't see the ponies like this... He'll put them under his spell..." I said. I then thought of my protection spell. I closed my eyes. My aura surrounded each 조랑말 and they looked confused. 무지개, 레인 보우 Dash flied to where she was supposed to place the heart. King Sombra caught her tail, and we all gasped. I ran to the crystal heart, and picked it up. I tried harder, because I was getting weak from protecting the ponies. I ran as fast as I could to place it, and I did. Kind Sombra's eyes widened and the crystal hearts' power aimed for him. "Noooooooooo!" He shouted, getting thrown out of the sight of Equestria. All of the ponies saw this, and they all cheered.
tailsfan111, Musiciansatlas and 1 other like this
Seanthehedgehog Yay, you defeated King Sombra
karinabrony [b]Ha ha![/b]

3
Celestia and Chrysalis
added by sarhasla

4
Background 조랑말 Fun!
added by shadirby
Source: Original Owners I don't own any of these 이미지 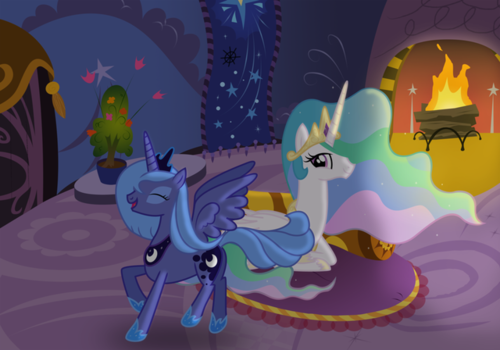 2
Celestia and Luna
added by Metallica1147 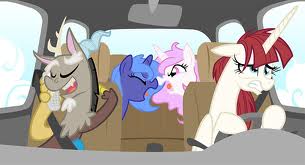